What Printer Companies Don't Want You To Know 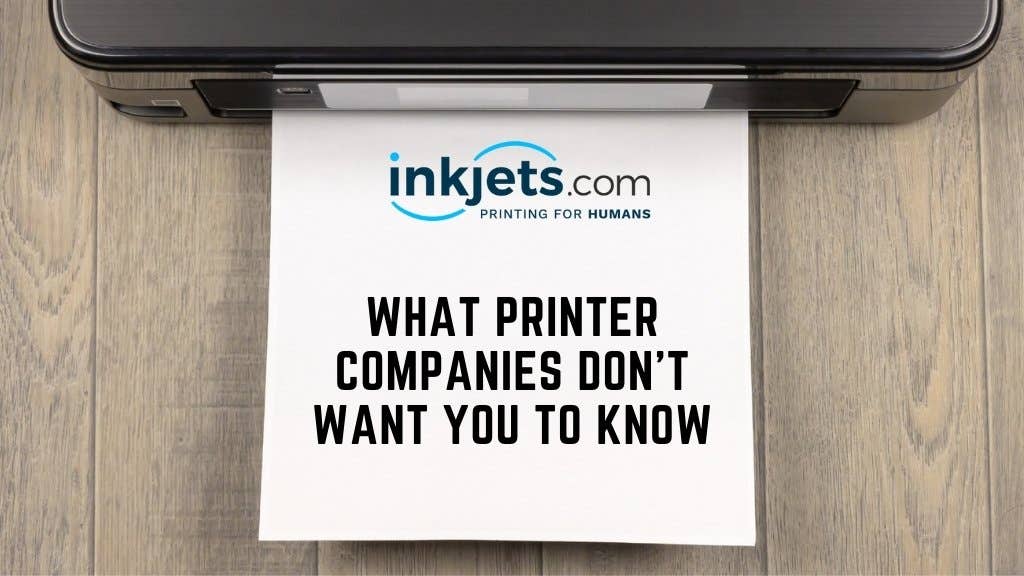 You may or may not be aware that many printer manufacturers not only make printers; they also make their own paper. Canon, HP, Epson, and many others sell regular 8.5 x 11" paper under their OEM (original equipment manufacturer) brand names, and they of course "recommend" using their paper with their printers.

But how many of us actually pay more for paper just because it has the name of our printer brand on it? Some might; but the majority of us know that we can buy much less expensive paper and get the same quality prints.

However, what if the printer companies didn't just "recommend" that you use their paper? What if they required it? What if they could tell when you loaded a blank sheet of paper made by any other brand, and then refused to print, claiming the paper was "incompatible"?

Well, that's exactly what many printer companies do when it comes to ink.

Just like paper, the printer companies make their own ink, and charge huge premiums for it.

What the printer companies don't tell you is that there are many companies that make compatible or "generic" ink cartridges that work just as well as the name brand cartridges, but cost a fraction of the price.

The printer companies are more than happy to keep this a secret. In fact, their business model depends on it.

Printer companies use what's called the “razor and blades” business model. This refers to shaving product companies that discovered the best way to make the most money was to sell the razor handles very cheaply or at a loss, and then make up the difference (and more) by selling the blades at an inflated price.

With over 80% of printer customers buying OEM ink, this adds up to billions of dollars in profits for the printer companies every year!

Just by knowing that there are less expensive options than OEM ink puts you ahead of the game. Buying aftermarket compatible and remanufactured ink from Inkjets.com, where we offer excellent quality products at prices far lower than those of the brand name inks, is the best way to save money, and fight back against the printer brands' exorbitant prices.

The Printer Empire Strikes Back Against Affordable Printer Ink

The printer companies, of course, hate that high quality, low cost compatible and remanufactured ink cartridges are available to consumers; and they've tried all sorts of ways to trick consumers into spending more on their overpriced ink.

From unnecessary firmware updates that simply prevent the use of compatible cartridges, to "alerts" that claim compatible ink will damage your printer, the printer companies have tried their best to prevent you from being able to choose to save on your ink.

Thankfully, the law is on your side.

Read on to find out how some of the biggest printer companies in the world have tried, and failed, to keep you from using less expensive compatible and remanufactured ink cartridges.

In an effort to prevent the use of remanufactured toner cartridges, Lexmark initially initiated a slew of unsuccessful copyright and patent lawsuits against manufacturers of third-party compatible ink cartridges.

Lexmark claimed that manufacturers were infringing on Lexmark's patent on the cartridges by refurbishing and reselling them without permission and outside the limits of Lexmark's service agreement with end-users. In other words, Lexmark was claiming that its patent rights extended beyond the initial cartridge sale to include future resales.

The practical question is how much power Lexmark or any other firm has over what you do with the products you purchase. This discussion isn't just about printer cartridges. How do you know you own a car when you buy it? What exactly does ownership entitle you to do with your property?

These issues are part of a larger debate about the "right to repair", or "freedom to tinker," as some experts refer to it. The idea is that if you acquire something, you should be able to do whatever you want with it, including selling it, modifying it, and even destroying it. However, certain businesses, like automobile manufacturers, have attempted to curtail this flexibility.

They make claims similar to Lexmark's, claiming that treating a product in a way that could jeopardize the company's operations violates patent or copyright laws. The customer may believe he or she owns the physical product outright, but they are nonetheless bound by an unseen cage built of corporate intellectual property, according to this viewpoint.

This viewpoint was rejected by the Supreme Court. Chief Justice John G. Roberts Jr. used an analogy to help explain his case:

"Take a shop that restores and sells used cars. The business works because the shop can rest assured that, so long as those bringing in the cars own them, the shop is free to repair and resell those vehicles. That smooth flow of commerce would sputter if companies that make the thousands of parts that go into a vehicle could keep their patent rights after the first sale."

When Lexmark's efforts to stop aftermarket ink didn't work, printer manufacturers started putting in harsh limitations, such as superfluous cartridge expiration dates, irritating DRM, and firmware updates that prevented the use of "unofficial" cartridges. As public outrage over this practice grew, other printer manufacturers got more inventive in their efforts to limit consumer choice to their branded ink.

HP, for example, was publicly chastised in 2016 when it released a "security upgrade" that essentially did nothing but prevent the use of less expensive third-party ink cartridges and toner cartridges.

Faced with a class action lawsuit, HP was forced to give a flimsy mea culpa and alter course after a massive public outcry over the printer ink, and ultimately settled for $1.5 million. But the industry didn't seem to have learnt its lesson yet.

Epson, according to the Electronic Frontier Foundation, had been engaging in the same practices against discount printer ink cartridges. According to the group, Epson launched a "poison pill" software upgrade in late 2016 or early 2017 that essentially downgraded a user's new printer to block third-party cartridges while masking the software update as a significant improvement to their printing needs.

Following this, the EFF wrote to Texas Attorney General Ken Paxton, claiming that Epson's lack of openness is "misleading and deceptive" under Texas consumer protection laws.

"When restricted to Epson’s own cartridges, customers must pay Epson’s higher prices, while losing the added convenience of third party alternatives, such as refillable cartridges and continuous ink supply systems," according to the complaint. "This artificial restriction of third party ink options also suppresses a competitive ink market and has reportedly caused some manufacturers of refillable cartridges and continuous ink supply systems to exit the market."

Epson was subsequently faced with a class action lawsuit.

Printer manufacturer Brother, while not specifically targeting aftermarket compatible and remanufactured cartridges of printer ink, has also been accused of some very shady printer practices.

According to a 2018 class action lawsuit, Brother allegedly programmed their laser printers to stop printing before ink and toner cartridges run out, even though the cartridges still had a large amount of toner left in them. This practice would force consumers to replace printer ink cartridges sooner than necessary, driving up Brother's profits.

In the lawsuit, plaintiffs argued that Brother sold toner cartridges and printer ink cartridges that substantially underperformed when compared to the page yields that were advertised on the packaging.

This is not dissimilar to ANOTHER Epson class action lawsuit, which the company lost in 2006.

It's clear that printer companies will do whatever they can to make more money, even if it means tricking consumers into spending more on their own brand's ink and toner cartridges. The best way to fight back against these companies is to exercise your right to choose which products to buy, and how much to spend on them, and to buy from companies that respect your right to use the cartridges of your choice.

Your Source For Aftermarket Printer Ink Cartridges and Toner Cartridges

Inkjets.com has been providing high quality, low cost alternatives to overpriced OEM ink cartridges for over 20 years. We offer a 100% Satisfaction Guarantee on all of our aftermarket ink products, and free shipping on orders over $30. Shop now and start saving!

Previous Why Are Printers Cheap and Inks So Expensive?
Next Compatible vs. Remanufactured Ink Cartridges
Categories
Recent Posts
Everything You Need To Know About Cloud Printing
OEM versus Aftermarket Ink Quality: What's The Difference?
5 Signs You Need A New Printer
The Ultimate Guide To Duplex Printing
Does Aftermarket Ink and Toner Void My Printers Warranty?